Some thieves are made of honor... and something else.
Jesse Jim Johns and Big Butch Casey are two of the dumbest geniuses in the world.  And they just happen to be partners in crime.  But these genius criminals are thieves of honor and live and work by a set of rules imparted on them by their mentor. While maintaining their dream of entering the famous League of 40, the duo find themselves on various misadventures where they encounter deadly crime bosses, cyborg bounty hunters, mutant henchman, magical tricksters and many other crazy and lovable baddies and goodies. 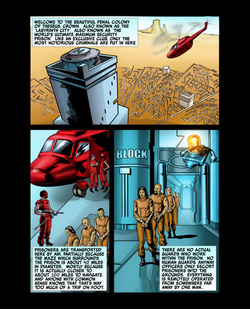 First page of the upcoming Illicit Liberties: Theseus' Crown.
Written and Created by Marcus E.T. (aka Yours Truly),
Pencilled and Inked by Stoian Russev,
Colored by Mahesh Gaichor,
and Lettered by Kenny L. Jeffery
Theseus’ Crown is a penal colony, a city designed within a labyrinth to act as the ultimate maximum security prison.  Prisoners are transported into the city by air.  There are no human guards.  The warden works through video feed and remote controlled machines.  If any prisoner is sentenced to death or attempts to escape the city, he is sent into the labyrinth and is never heard from again.

Men have tried to simply run through the 400-mile maze of traps…and failed.
Some have tried digging under the walls… and failed.
Others have tried to hijack a plane… and fell to their deaths.
Escape is impossible… so they say…

After a string of crimes, Jesse and Butch have pulled the heist of the century, only to allow themselves to be caught and put into the labyrinth city.  But they have friends on the inside and something to prove… that even the inescapable isn’t.

These are the original design concepts for the characters of Theseus' Crown by Cem Iroz.